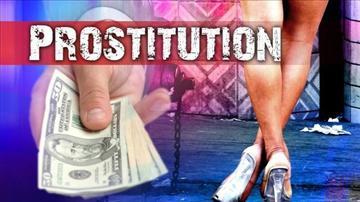 ELKHART, Ind. -- On Friday and Saturday, this past week, the officers from the Anti-Crime Unit busted 10 people in a prostitution sting!

Police said a female officer posed as a prostitute during the operation.

The following people were arrested during the two-day sting:

All of the suspects involved were charged with Patronizing a Prostitute, a Class A Misdemeanor.

Christopher Himes is a prominent businessman in Elkhart. He is the President of Recycle Works Inc.-- a division of Waste-Away Group Ltd. ABC 57 talked to Himes back in June when Waste Away Group acquired the old Elkhart Farmer's market building .

Himes told ABC 57 his company is responsible for hauling away trash materials and sorting recyclables.

We went to Himes' home in Elkhart to try and get his side of the story. When we arrived, we found his garage door open and a car running in the driveway, but we were unable to make contact with Himes.

Instead, we talked to neighbors to find out what could've have happened to lead to Himes' arrest.

Neighbors did not want appear on camera, but told us they were shocked to hear about the charge against Himes.

We talked to three neighbors who all said Himes is a good neighbor, husband, father and businessman.

Himes' business, Recycle Works is located just one block away from Harrison Street between 6th and 8th.

Residents in the area told us they too, are not surprised to hear about the prostitution sting.

""From what I've seen from living here is a lot of prostitutes being picked up and making money and a lot of the them getting busted," said Josh Sims, a local resident.  "And like, this area right here, this block or that block."

Corner Stop, a convenient store located on the corner of 6th and Marion is stuck right in the middle of busts.

Stephanie Shott has worked at the store for 2 years. She said she sees many of the alleged prostitutes come into the store to pick up condoms and just to talk.

"It breaks my heart. I talk to a lot of them, like sister to sister and tell them that I want better for them," said Shott.

Shott and her fiance said the some of the girls are as young as 14-years-old. She said most of them come from broken homes and have no place to go.