Elkhart boy not giving up fight against brain cancer 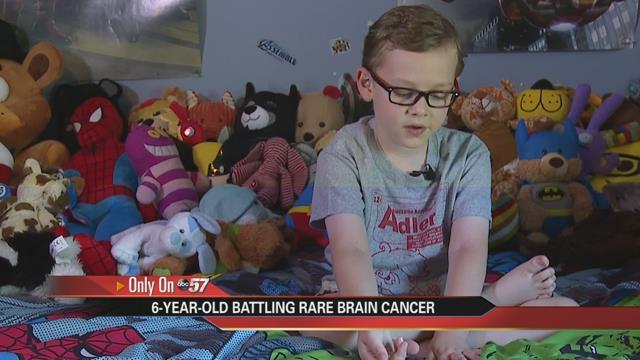 It was just a couple of years ago we met Adler Carris. He was just four years old, bald and skinny from chemotherapy. Adler has a rare form of inoperable brain cancer.

At first glance, Adler is your typical six year old. He loves running, he loves his friends, and maybe more than anything, he loves his superheroes. But Adler wouldn't describe himself as "typical."

"It’s just really cool that I’m half normal and half not normal," Adler said.

He says he's half normal, because he can run and play. But it wasn't always that way.

Adler's mom, Elizabeth, tells us his brain cancer is "inoperable." She says the word "capsized" came to mind when she first learned of her son's diagnosis.

"When you’re told your child has cancer, it just takes the wind right out of you," Elizabeth said.

The long hours, days and weeks of chemotherapy were brutal on Adler.

"Real life childhood cancer is a child laying on the floor with a puke bucket next to them. Waiting for me to numb his port so we can go to the ER because he’s got a 102 fever and we have to go in the middle of the night," Elizabeth said.

And it was tough on his parents too. But there was one distraction that made everything a little more bearable. Superheroes.

"It fits him. Because he fights," Elizabeth said.

New ones, old ones, you name it, he knows their name and their story. And like many of those comic characters, Adler's story, doesn't have a predictable ending.

"You’ve got to do it now. Because we don’t know. There is no definite with him," Elizabeth said.

"I fight cancer. And the battle never ends. Because it’s inoperable," Adler added.

For now, the Awesome Adventures of Adler continue. He calls himself a "living weapon against cancer."

"You see things differently. You can’t help but see it differently. And you see it through him. So it makes it even brighter, Elizabeth said.

He's their beacon of light, as they charter a course toward a cure.

Although doctors have confirmed there's been no new growth in Adler's tumors, every three months the Carris family heads to Chicago for an MRI. If you would like to help Adler's cause, the family has a go fund me page set up to help raise money for mounting medical costs. Click here to donate.