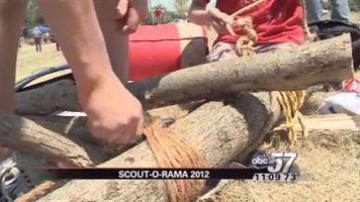 ELKHART, Ind. -- Knot tying, log stacking, and even zip-lining were all part of Scout-O-Rama.

It's an event put on by Elkhart's Boy Scout Troops in order to get the public more interested in the outdoors.

The troop leader said kids spend too much time in front of the TV, so he put this event on to het more kids outside and moving.

"We're tired of watching boys be slaves to computers and video games. We want them to see what it's like to be outside, to do something constructive, to see what they're actually capable of, to test them," said Bryce Kime, the Head of Boy Scout Activities at Pioneer Trails District, LaSalle Council.

Nearly 500 kids were on hand for the event which was offered for free thanks to generous donations.