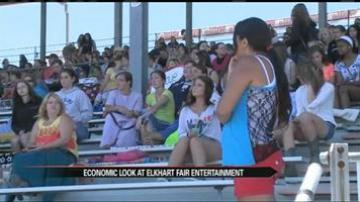 GOSHEN, Ind. -- It's the list thousands of people in Michigan have been waiting for - the concert lineup for the Elkhart County 4-H Fair.

Organizers believe this year's lineup might be one of the best yet.

"Those five nights bring thousands of people onto the grounds, who spend money at the fair. So that’s a great revenue source for us," said Elkhart County Fair Advertising Director Wayne Kramer.

Revenue, or the money raised from concert ticket sales, primarily remains on fair grounds. But the Elkhart community does benefit from some of the money.

"When you have 280,000 people on the grounds, and our research shows they spend anywhere from $25 to $250 while they’re here. So it’s a large economic factor for us," Kramer said.

They credit a lot of its success to the big names they get to perform. While thousands do pay for seats most of the people who go to see the concert attend for free.

A lot of people come from across the country.

"Typically we bring people from a 50 to 75 mile radius, but we have people come from all over the country to this fair because of its reputation," Kramer said.