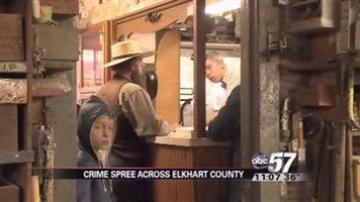 Luckily no one was in the school when the robbery happened, but some other people were not as lucky.  They were confronted at their doors with rifles from this buggy shop.
(BRANDON MARTIN) (SON OF OWNER OF BUGGY SHOP) (WORKS AT BUG SHOP THAT WAS ROBBED)
"They came in here and got all of the cash out of the cash register and then they stole three guns right out of this cabinet here", said the son of owner of the buggy shop Brandon Martin.

The Martin buggy shop was not the only place that was robbed.

The thieves got away with even more loot.

One of the suspects stole a credit card from the home and used it at a marathon in Mishawaka.

Martin says he does not plan on pressing charges, but he would like his stuff back.
.
"I would actually like my guns back if that would be possible", said Martin
He says he is more worried about what the suspects could do with those guns.

"Our main concern is getting them off the street before they kill somebody or hurt somebody", said Martin.

The Elkhart County Sheriff's Department does have two person's of interest in the case.