Elkhart County man dies after being ejected from car 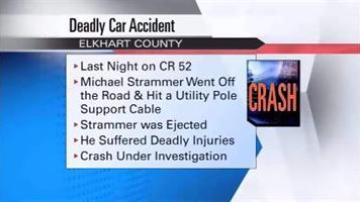 ELKHART COUNTY, Ind. — An Elkhart County man is dead after he was ejected from his car during a crash on County Road 52.

Police say that Michael Strammer, 52, was driving eastbound when he drifted off the road and was ejected from the vehicle.

His passenger, Melissa Gamblin, 52, was taken to the hospital for precautionary evaluation.

Police say that neither Strammer or Gamblin were wearing their seat belt.