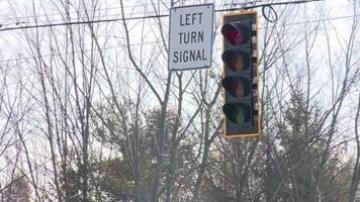 ELKHART COUNTY, Ind. -- In the last three years there have been more than 60 accidents at the intersection of CR 17 and CR 18 in Elkhart County. Officials discovered most of the accidents were caused by a driver turning left, so they believe they have a solution.

Of the 60 accidents at that intersection, 44 happened to someone trying to make a left turn.

Officials are trying to fix the problem with the traffic light. At peak hours, instead of a green light, people turning left will see a flashing yellow arrow.

Lucchese says in the past, people turning left saw a green light but often failed to yield.

So now during peak traffic hours they'll turn on the yellow flashing arrow.

"It's just been approved so it's the first one in our county. I don't know anywhere else around here that has them like that, so we're going to give it a shot here and you may see more pop up," said Lucchese.

No one wants a solution more than Mike Tomko. He works in the home closest to the intersection.

"I almost think or wonder if I should take a class in becoming certified to help somebody out with all the accidents I do see on the corner," said Tomko.

Tomko says he's a little skeptical and thinks there's another problem they might have missed.

"When you're trying to go north or south and you're turning left, you can't see the traffic that comes your way if somebody else from the opposite direction is turning left," said Tomko.

The Elkhart County Traffic Department said they're going to give it a month and then look back to see if it's had an impact or not.

If it works well, they'll consider this type of light for other busy intersections in the county.