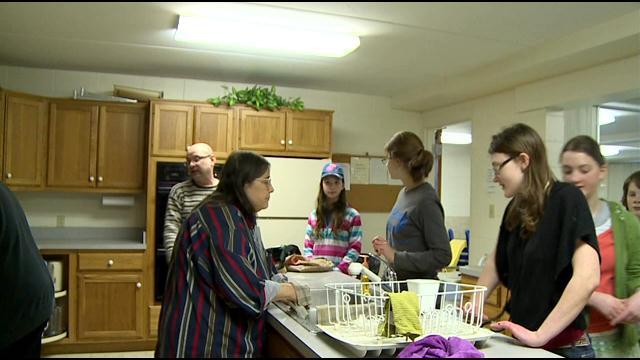 The homeless population in parts of Michiana may be growing and the local governments may not have accurate statistics.

A new census report could identify over 300 homeless residents in the Elkhart county area, alone.

And many more could go uncounted.

This year officials are bracing for even higher numbers.

On a Monday night in Goshen, volunteers of Walnut Hill Mennonite Church cleaned the kitchen after serving a family of six a hot meal for the night.

It was a slow night with only one family opting to stay at the shelter.

But for Nancy Smeltzer, a six-year volunteer at the shelter, helping others is her only desire.

“I can't afford to give money, but I can give of myself,” said Smeltzer.

This church is one of several churches under Interfaith Hospitality Network that takes in homeless people for the night.

Homeless residents that occupy these spaces were counted among many back in January in the 2015 point-in-time-count report mandated by the federal government and state.

Interfaith Executive Director Phil Keller says the problem with this census is finding homeless residents to participate on the day of the study.

“They have found someplace to get out of the extreme cold so they can be very hard to locate," said Keller. "Now, in some cases we found where people had been but they made themselves scarce. If they were there at all, they didn't want to be found.”

While the survey says this is a snapshot of the homeless population for the county, Keller believes the Department of Housing and Urban Development's (HUD) guidelines are too exclusive.

“I'll give you a for instance: If we interview a man and he says ‘I'm actually homeless, but last night, the night of your count, I stayed on a friend's couch,' then according to HUD, he's not homeless," said Keller.

In order to receive the remaining federal grants, Interfaith is pushed to increase turn over times for the program, pushing out those in need.

“If other shelters are able to reduce the stay of their families and I can't I could lose all of my funding,” said Keller.

For volunteers like Smeltzer, neither choice is an option.

“We can't just shove people away so any few pennies you have please shove them our way,” said Smeltzer.

Keller also says last year more homeless citizens were willing to participate in the study because they had to disclose less personal information.

He believes that could account for the 139 percent increase last year.