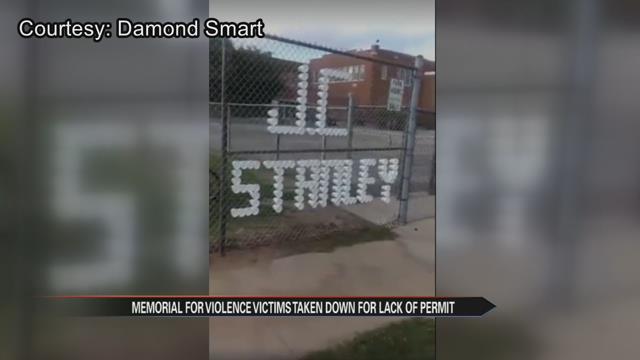 87 names memorializing victims of gun violence are gone from Roosevelt Park. An Elkhart man had to take down a memorial Saturday morning that he had made to remember those killed in the past few years.

Up until this morning, there were 1700 cups around the entire fence spelling out those names. But, because the man who put it together didn’t have a permit, all those cups had to come down.

“I just think it’s really sad, because that meant a lot to a lot of different families that someone just took that out of the kindness of their heart to recognize a different family,” said one victim’s mother, Kimi Jackson.

Kimi Jackson’s seven-year-old daughter Krystiana was murdered back in 2012. She’s one of many.

That’s why Damond Smart decided to put cups in this fence spelling out names of friends and family lost to gun violence. He knew every single one personally.

When people saw what he was doing, others started posting on his Facebook requesting that he add their loved ones’ names too.

“Hey, will you put my family up there and just started getting posts and tags of different names of people who had been killed by gun violence,” said Jackson.

You’re supposed to get a permit for any public display like this one. Smart didn’t.

Mayor Tim Neese initially gave him a pass when he found out the purpose behind the cups, but he asked him to remove them after last night’s vigil in the park.

“I’m not condoning people not getting permits, but I felt it was reasonable to let him go ahead and do it…and he had in fact kept his word given that he had taken them down,” said Elkhart Mayor Tim Neese.

Smart did that starting at 9 o’clock in the morning Saturday. He spent five hours removing all 1700 cups. He said he thinks the purpose has been served.

“It just raised awareness to our community that there’s that many names of people that have been killed by gun violence, and it’s sad that if you need people like him to bring awareness and make people talk about it, because there are a lot of people on that fence who have unsolved murders, and my daughter is definitely one of them,” said Kimi Jackson.