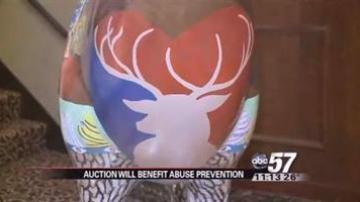 ELKHART, Ind.-- It's a tragic trend that's plaguing the country. From national news to local news, there seems to be a horrific case of child abuse reported everyday.

But on Nov.18,Elkhart County's Child and Parenting Services (CAPS) held the final parade for the Elkhart Elk as a benefit to prevent child abuse and promote healthy families.

The colorful elk have been scattered throughout Elkhart County since June and on Nov. 19 they will be auctioned off to the highest bidder-- with all proceeds going to CAPS.

"We aren't really sure how much these guys will be going for," said Jami Stamm, marketing director for CAPS. "But we're hoping to raise $200,000."

But what Stamm didn't expect, was the number of people who became attached to these creative landmarks.

"Mr. Elk has taken on a personality. He isn't just a work of art anymore, he's got a personality and that makes him special," said Van Hershberger, one of the artists behind the famous "Mr. Elk."

Hershberger worked with his cousin and brother to deisgn and paint the theater-attending elk. They've worked together to paint RV's and Vans, but this was their first attempt at an art project. And the result was more than they had hoped for.

"The elk brought the family together. And that's a wonderful part of this," said Hershberger.