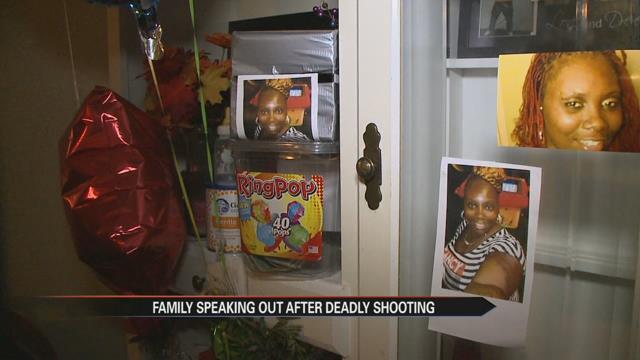 A week after an Elkhart woman and mother of five died after being shot inside her home her children are trying to cope, dealing with a range of emotions. One of them was actually inside the house on Park Avenue when that bullet blasted through a window.

8-year-old Amenah was inside the home with her mother and cousins last week.

Still a little stunned and shy she was able to explain what she did as soon as she heard the gun shots and her grandmother, Teketa Hixson’s mom , says she heard the hysterical aftermath through the phone.

“I was scared. And I crawled in my mom’s room and I got down and I was crying to my mom,” said Amenah.

November 30, just after 9:30PM shots fired into a house on Park Avenue in Elkhart and 8-year-old Amenah was there.

During the chaos, someone in the house called Teketa Hixson’s mother, Gwendolyn Bates.

“The second call came from my granddaughter, she was pleading me to come get her, and “Grandma please come get me, they shooting up the house, please,” said Bates.

34-year-old Teketa Hixson had been shot. Days later she was pronounced dead.

A 14-year-old accused of pulling the trigger; a teen the family says they know.

“I treated him like a brother,” said Amairyia, one of Teketa’s daughters.

Teketa’s 14-year-old daughter Amairyia says the boy she thought was a friend fired at her home because of an argument.

“It was something really childish like unnecessary. So it went from an unnecessary argument to, “Oh yeah, I’m going to shoot up your house.”

Elkhart police have not identified the suspect and have not released details on a motive. Right now he’s in juvenile detention.

“He shot the gun he knew what he was doing he was aiming for the girls but he shot their mother,” said Bates.

Despite the suspect being in custody, Teketa’s daughter says she’s still living in fear.

“They’re messing my childhood up. I can’t do anything.  I can’t go out to eat if I wanted to. I can’t have fun,” said Amairyia.

Bates tells say she just wants her grandchildren left in peace. They are still collecting funds for her daughter’s services.