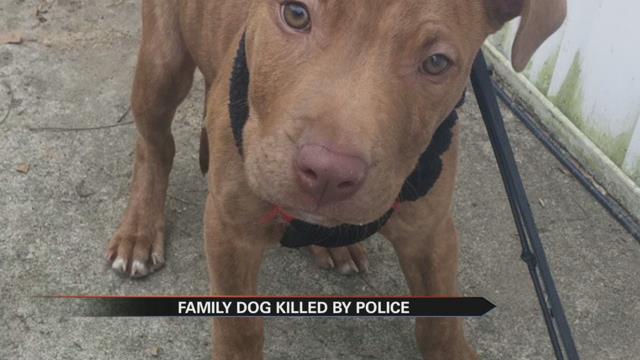 One family is grieving the loss of their 10-month-old pit bull that was shot and killed by Elkhart Police Wednesday.

They say although their dog was a bit playful and energetic, he would never attack people.

Police say the dog tried to attack one of their own, prompting one officer's decision to put it down.

“He wasn’t a dog running around loose in the streets,” said owner Andy Cabreras.

Neighbors say it was misunderstanding that turned a police call of a loose dog into a shooting right outside their homes.

“It didn’t deserve to get shot, it was just a puppy,” said neighbor Angie Castillo.

Cabreras says his father sent Tito inside their home after police gave them a warning.

He says as his father stood on their front porch, Tito got loose.

“He likes to run around so he turned around again and when he ran outside again that’s when the police officer shot him,” said Cabreras.

Witnesses say the dog was shot several times along the sidewalk outside the Cabreras home.

Our reporting partners at the Elkhart Truth spoke with Sgt. Chris Snyder of the Elkhart Police Department and he says the department is looking into the incident.

Sgt. Snyder says the officer believed the dog was charging him.

“The puppy was shot for no reason just because he was a pit bull,” said Castillo.

It might've been a loose pit bull to the police department, but it was a misunderstood puppy to the grieving family.

“We wanna heal a little bit before we even think of another pet,” Cabreras said.