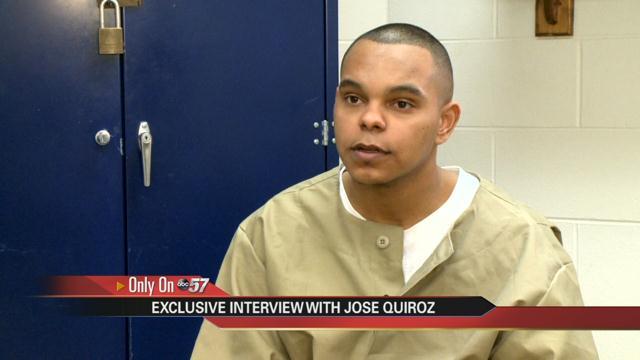 ABC57 traveled to the Wabash Valley Correctional Facility in southern Indiana to speak one-on-one with Jose Quiroz, a member of the 'Elkhart Four,' just one week after his conviction was modified from murder to burglary.

Quiroz discussed the night of the burglary, why he signed a plea agreement, and his hopes for the future.

"I remember me being in the front and going to the back and kicking in both doors," Quiroz said.

When Quiroz and his friends knocked down a door to commit a burglary on October 3, 2012, that decision changed his life and the lives of countless other people forever.

"I still get caught up thinking about it to this day," Quiroz said.

He is an inmate at the Wabash Correctional Facility just outside Terre Haute. ABC57 was given full access to Quiroz and the facility.

"We workout right here, of course the phones. This is the J-Pay it's like e-mails, pictures video, visitation, showers," said Quiroz.

He says they spend about 2.5 hours a day in the common area.

For Quiroz, it was a fast path from being a petty thief on the streets of Elkhart to a convicted felon with a 45 year jail sentence.

Brian Dorman: Ever break into cars, steal anything before?
Quiroz: Nope. I mean petty stuff like stealing from a store growing up like a pack of gum but that was probably about it.
Dorman: You can't go from stealing a pack of gum to breaking down two doors and into someone's house. Be honest with me. Was there any time you stole anything from a car, a friend, a friend's parents? Something? There has to be something before this day -I don't believe that.
Quiroz: I really don't want to speak on it.
Dorman: I understand that. There were other instances before this, though, weren't there?
Quiroz: Yea, there was.

Those small crimes aren't what dominates Quiroz's thoughts. Instead, he spends time in his prison cell reliving that fateful day.

Dorman: What did you need the money for?
Quiroz: Smoking weed, just for weed
Dorman: That's what this was all about?
Quiroz: That's all it was - just get some weed.

Those two invited two others, 18-year-old Anthony Sharp and 21-year-old Danzele Johnson to help with the robbery.

The plan was simple - break into homes and find cash.

Dorman: At any point out of the five of you did you feel anybody was nervous about it or hesitant about it?
Quiroz: I think we all were. We all were.
Dorman: In what way?
Quiroz: I don't know, I think it's just a gut wrenching feeling, mixed with anxiousness and adrenaline. Ready to get it over with.

The young men attempted to break into a house, but bailed when they heard dogs barking inside.

After that, they went to 1919 Francis Avenue.

They thought the house was empty, but the homeowner was actually asleep upstairs.

He awoke when he heard the boys bust through the door

"We weren't even in the home for five minutes and we were in the same room, we were all in the same room and it seemed like about 100 gunshots with loud pops," said Quiroz.

Layman was shot in the leg, Johnson in the chest.

With homeowner Rodney Scott's gun trained on the boys, Quiroz realized that Johnson was hurt bad.

"I started to see blood come out of his eyes and his mouth, he started gurgling and stuff-It happened so fast. When he was in my lap he was trying to talk and his eyes kept rolling to the back of his head," said Quiroz.

Johnson was pronounced dead on the scene.

Layman was arrested next to his friend's body, but Sparks, Sharp and Quiroz took off running.

"When they came in and I heard them say, 'Elkhart Police Department.' I poked my head out the door way and I saw Rodney turned his back so, like I said the adrenaline. There was a shelf, I threw the shelf down and jumped out the window and started running. I was so nervous my legs kept giving out and about two blocks away they caught me," Quiroz said.

The crime gained national attention when the four were charged with Johnson's death even though they didn't pull the trigger.

They were referred to as the Elkhart Four.

Just a month later, Quiroz hastily took a plea deal with a sentence that couldn't be appealed.

Quiroz says it was a mistake he made because he felt threatened by his public defender.

"He was always aggressive like, this is what they're going to do, they aren't going to do. At one point in time I remember him saying, 'Well hell if you bastards came into my house all you guys wouldn't have made it out.' There was one time we got into a full fledged argument just yelling back and forth at each other and he just walked out on me," Quiroz said.

By taking the plea deal, Quiroz became the prosecution's key witness against his friends and was sentenced to 55 years.

When he testified, he changed his story.

Dorman: You changed your whole story? What happened there?
Quiroz: I just told the truth. Told them that everything was on me like it was in the beginning because I felt that it wasn't their fault. They were on trial for something they didn't do. I mean, if I never would have made that text then we wouldn't be here today. So I felt it was something I needed to do. In the beginning it was all lies just trying to cover everything up for myself, being selfish, scared and selfish," Quiroz said.

On February 11, a judge changed Quiroz's conviction from felony murder to burglary to match the findings of the Indiana Supreme Court in his co-conspirators' appeal.

Quiroz's sentence was also reduced to match the sentences of Layman, Sparks and Sharp.

Right now, Quiroz is scheduled to be released in October, almost four years to the day of the botched robbery.

"It still hasn't kicked in yet. It kicks in when I call home and tell my mom we need to get my living arrangements clothes and stuff like that. It makes me happy. It makes me feel good about myself that none of us gave up and we just kept our faith and out hope up, it all paid off," said Quiroz.

He said he plans to move in with his mom, which is across the street from the home where his nightmare began.

Quiroz: If the new homeowner allows me to go in, just to sit in that room for a minute to talk to Danzele or to just think, I think I would be able to do that. It would take time though.
Dorman: You want to back inside the house?
Quiroz: I think just to give Danzele that respect it's needed.

He wants the Johnson family to know he's sorry.

"To the Johnson family, I'm sorry. Never really meant to come to the terms of this stuff happening and I just really regret the whole situation but I can't really express enough how sorry I am and I wish just like you guys wish that Danzele could come back. He didn't deserve it," Quiroz said.

Quiroz's sentence was modified after the Indiana Supreme Court modified the convictions of his co-conspirators.

When Layman, Sparks and Sharp's convictions were reduced from murder to burglary, a judge sentenced Layman and Sharp to 10 years in prison and Sparks to 9 years.

Sparks has already been released.

Layman is scheduled to get out later this year. Sharp is expected to be released in 2017.

Rodney Scott has never talked publicly about that day. He has since moved from the Frances Street home.