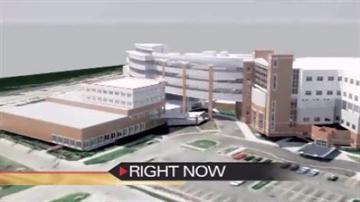 ELKHART COUNTY, Ind. -- Elkhart General Hospital is beginning a $74 million, 3 story, 150,000 square foot addition to the hospital’s main campus between East and West boulevards in the fall. The new wing will have larger operating rooms, patient rooms and plenty of extra space.

There's nothing wrong with the current Operating Rooms at the hospital, but because they were built 40 years ago, they are not able to accommodate modern technology.

"Things like robots were not envisioned in 1972 and they are today, so things like robots, imaging equipment and the OR size is really limiting in terms of the procedures we can provide so everybody wants the bigger ORs,” said Greg Losasso, President of Elkhart General Hospital.

For Losasso and his staff, the future is bright.

The $74 million expansion project will add 150,000 square feet to the west wing of the hospital.

There will be 8 to 10 new operating rooms with higher ceilings and more floor space so they can accommodate the latest medical technologies.

"The cords are, you know, you can stumble over them. You know it's hard to roll beds over them. The equipment doesn't roll efficiently over them.

Moriarty spends every day in the operating rooms and she knows the expansion is bringing some much needed space.

“Everything is going to be going up and out so it's not all just hanging around,” said Moriarty.

"Our staff reaction has been exceptional. Right now people are very excited about it. Even with the construction, they're looking forward to it,” said Losasso.

The construction on the project is expected to begin in the fall and be completed by 2015.