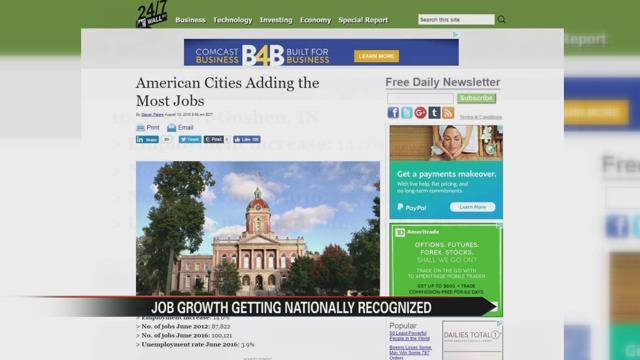 The Elkhart-Goshen area is getting national attention. The cities were ranked top ten for job creation in the country and in the state they were ranked at the top.

The list of ‘50 American Cities Adding the Most Jobs’ was released this month by the financial publication 24/7 Wall Street.

“It makes me excited because I know it’s going to give our kids those opportunities,” says Jacalyn O’hara, a Career Coordinator at Elkhart Area Career Center.

O’Hara says to see Elkhart-Goshen at number 10 on this list of American cities adding the most jobs is a big change from 2008.

“It’s all about the kids and giving them the opportunities that ya know several years ago weren’t there,” says O’hara

“It’s kind of nice to share with the rest of the nation remember when we said we were coming back we weren’t kidding,” says Kyle Hannon, the President of the Elkhart Chamber of Commerce.

Hannon says a majority but not all the job are coming from the RV industry and he thinks his city could do even better.

“The only thing holding us back is the workforce we could do even more but we are creating more jobs than we can fill,” says Hannon.

Places like the career center say their job fair last year was packed with employers searching for new talent.

“I’m not exaggerating when I say somewhere between 250 and 300 kids got jobs,” says O’hara.

The Career Center says it too is having a hard time keeping up with demand for potential employees. O’hara says she will take the busy time over the lull of the recession

“It’s definitely night and day and it’s wonderful when there are this many jobs out there but we feel bad when we can’t fill them all,” says O’hara.