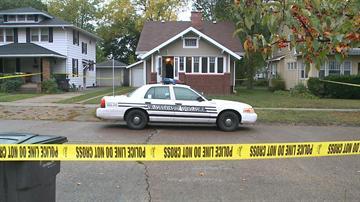 ELKHART, Ind. – One person died and another suffered gunshot wounds after a homeowner opened fire on a group of people attempting to break into his home on Wednesday afternoon.

At around 2:30 p.m. Elkhart Police were called to a home on the 1900-block of Frances Avenue on a report of an attempted burglary with shots fired.

“Two cops pull up, all you could hear is sirens everywhere, cops pull up, they run right behind me, they're running at the house,” described Tabitha Bowe, who was walking in front of the house with her 5-year-old son when officers arrived.  “They start screaming get down, get your hands up."

According to police, the homeowner said four people had attempted to break into his home.  He shot two of them and the other two ran away.  One of the fleeing suspects was caught by police after a short foot chase, as of late Wednesday night the other is still on the loose.

Tabitha Bowe said she witnessed the police arresting one suspect and taking another away in an ambulance.  As the police were hunting down the suspects she was trying to rush her son to safety, but stopped when she saw children getting off of a school bus in the middle of the scene.

"I fear for my kids lives as much as I fear for somebody else’s, so I'm going to make sure none of those kids are coming down towards this house,” she explained.  “Then the cop comes up to us and he just starts screaming 'run' so we all run, I get my kids to safety, I step out of the house and I watch them pull another guy out that was shot in the abdomen."

Officers found two suspects shot inside the home, one was pronounced dead on the scene and the other was taken to Elkhart General Hospital and later released.

"Now we're going to fear for our lives, because of the crazy people around here,” Tabitha Bowe explained.  “I'm with my children all day long, I don't work you know, so yeah I'm scared now, I'm really scared, I could be the one being home when something like that happens."

Police have yet to release the name or age of the person who was killed or any of the suspects who were arrested, but did say that the wounded suspect was a juvenile.