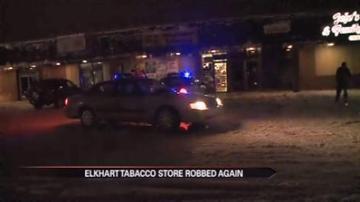 ELKHART -- The Elkhart County Sheriff's Department is investigating another robbery at Low Bob's on SR 19 on Sunday.

The suspects got away with an undisclosed amount of money and cigarettes. The two left in a getaway car described as dark or black, older Chrysler vehicle. A third white male was driving that car.

A week earlier on Saturday the same Low Bob's and the Elkhart Cigarette Outlet just a few feet away were both robbed within hours of each other.

The Sheriff's Department is asking for anyone with information to contact their offices.