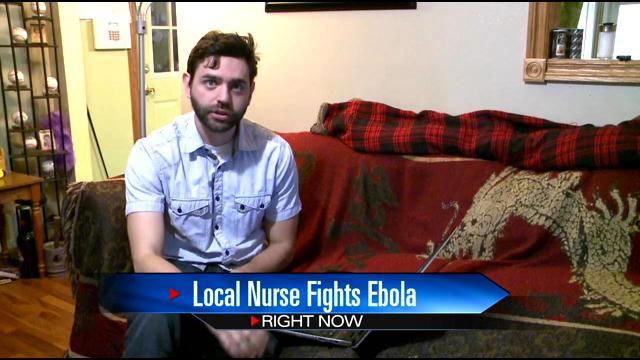 One Michiana man is leaving his home in Elkhart to fight Ebola in Liberia.

Aaron Mishler of Elkhart is volunteering to leave his work, family, and home to help those thousands of miles away.

Mishler works at maxim healthcare services in Mishawaka as a licensed practical nurse.

Mishler explains how he feels as he prepares for the volunteer trip, “As fast as everything is moving I just found out I was leaving this past Saturday. I haven't really had time to be nervous yet.”

Maybe those nerves won't hit Mishler until he lands in Liberia. His 24-hour journey begins in less than 12 hours and when he lands he will begin a six week volunteer program called ‘Operation Ebola.'

Mishler begins the story of how he found the opportunity to travel to Liberia by saying, “Well I have been watching the news and I know they need help over there and I was actually watching a news program and it said go to usa.gov/ebola."

That was the newscast that led Mishler to the charity Heart to Heart International. With the organization he will use his experience as a Licensed Practical Nurse.

Mishler will be working in a treatment clinic dealing with both suspected and confirmed Ebola patients.

To prepare, Mishler has received shots for yellow fever and typhoid and he's taking pills to prevent malaria.

Despite all the preparation Mishler says his family is still nervous.“They are worried obviously they are nervous but they have accepted that i set my heart and mind to this so i am going to do it,” says Mishler.

He is leaving a special person who doesn't even know how selfless her father is. Mishler's girlfriend is pregnant and due at the end of January.

At the time of the birth, his three month post Liberia quarantine will be over and he really wants to be able to tell his future daughter that he made a difference.

“Well I'm just looking to go over there and make some sort of a difference even if it is helping three or four people or just letting the community know over there that we care from over here,” says Mishler.

“I know a lot of people in the community are scared and rightfully so. But you have to remember that this illness can be stopped and prevented just like any other one with proper containment and medical care and there is nothing to worry about on this side.”
Share this article: