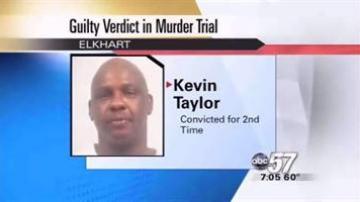 ELKHART, Ind.-- An Elkhart man is headed back to jail for murder after a jury convicted him for a second time.

Kevin Taylor was convicted in 2005 for the murder of Gwendolyn Hunt, but the conviction was overturned on a technicality.

It took an Elkhart County jury less than two hours to reach a verdict. Taylor will be sentenced on November 17th and faces up to 65 years in prison.

Two other men convicted in the case are still behind bars.