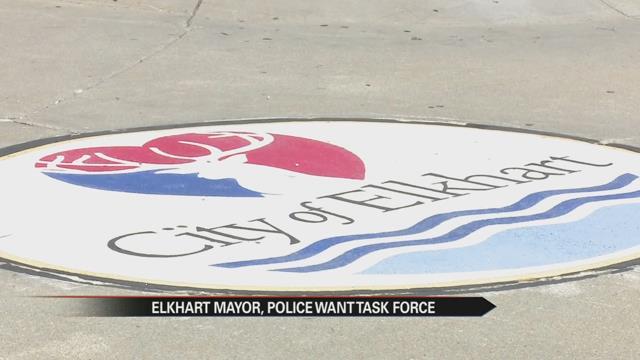 The City of Elkhart has plans for a police task force that will focus on serious crimes. This week a plan for an anti-crime unit was proposed to the City Council.

The task force would cost the city $530,000 a year and be made up of five officers who already work in the police department.

Mayor Tim Neese says this is an initiative he strongly believes in and he hopes it will improve quality life for current and future citizens.

William and Rebecca are two fairly new citizens. The Browns moved to Elkhart seven months ago from Alabama and say right now they do not feel safe.

“I really don’t want to be run out of our home. I mean this is our home,” says William.

The couple says their block on Middlebury Street is a hot spot for crime and they are protecting themselves with surveillance cameras, a guard dog and even more severe measures.

“I have a gun. I’m a U.S. marine. I’m trained and my wife will soon be ranged qualified,” says William.

The Browns say the City of Elkhart has provided good jobs but not a safe home and that is an issue that does not sit well with the mayor.

“I’m just not proud of what has occurred thus far as it relates to crime,” says
Mayor Neese.

Mayor Neese says since January he and the Ed Windbigler, Elkhart Police Chief have talked about bringing back an anti-crime unit to focus on drugs, gangs and narrowing in on suspects sooner.

“It’s important because of the interest of public safety. This also though is not a reactionary emotion because we have had some rather high profile crimes recently,” says Mayor Neese.

The Mayor wants to promote five officers within the department. Which would open up five patrol officer positions for the Elkhart Police Department.

Sergeant Chris Snyder says with a growing population and more violent crimes it is worth the city’s investment.

“So that we are getting quicker results and better results so that things aren’t a continuing problem,” says Sergeant Snyder.
The Browns are keeping an open mind but say either way, because of finances moving is not an option.

“It’s just one of those things to where it will either get better or it will get worse and only time will tell,” says William.

The City Council still has not approved funds to cover the anti-crime unit task force. The Mayor says he is almost positive they will vote to move forward with the plans and they will start hiring and training as soon as possible.