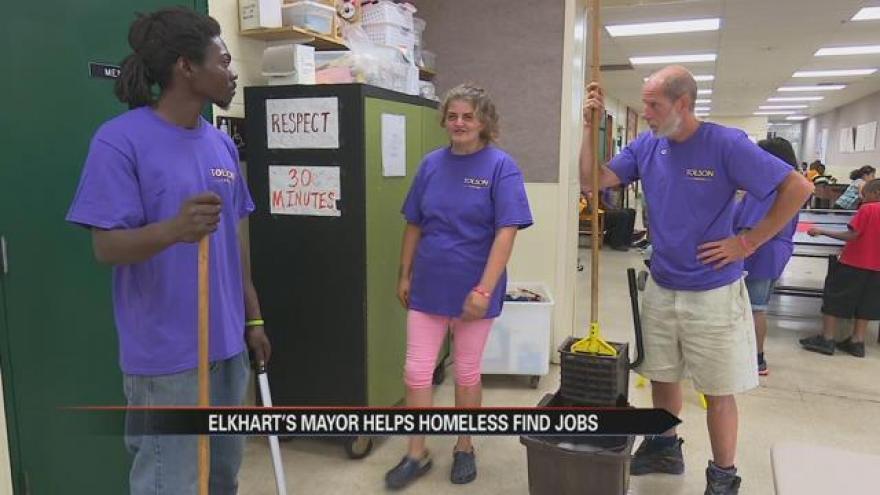 This week, three homeless people who were promised jobs by the Mayor of Elkhart reported to their first shift at the Tolson Center.

Two weeks ago city officials announced 16 acres of land near Dr. King Drive and 6th Street would be sold and cleared out by late summer.

A group of homeless people had set up makeshift homes known as Tent City, and would need to find a new place to go.

Mayor Neese promised those who lived on the land an opportunity for employment.

“We’ve been trying but we have been just barely being able to make it because it’s so hard to live these days,” says Bruce Collins, who lived in Tent City.

Bruce Collins says he, his niece Jamie Morrison and his friend Gregory McCullom all lived in Tent City together.

The three have been looking for work since a previous employer stopped paying them.

Now Collins wears a Tolson Center ‘Staff’ t-shirt, the first new clothing item he has put on in months.

Collins friends Gregory McCullom wants people to know the group is not opposed to working but it has been difficult to get back on their feet.

“I think there is a stereo type on the homeless population that we don’t want to work or that there is something wrong with us or not trust us,” says McCullom.

McCullom says without an income him and his trio resorted to live in the wooded area for the past two months.

“I don’t want to live in a tent any more. It’s cold and the floor is hard and the bugs,” says
Jamie Morrison.

In late May, Mayor Tim Neese explained to the group that living in the woods was not going to be an option much longer.

A job could soon create enough cash for the group to find a new home, so Collins says he Morrison, and McCullom jumped at the opportunity.

“Honestly I didn’t believe it at first I thought he was just trying to make himself look good but it wasn’t that he was legit about it,” says Morrison.

After interviewing and passing a drug test the three now working for the Park and Recreation Department doing custodial work at the Tolson Center, Monday through Friday after the kids go home.

“We need to be receptive of people who are trying to catch a break trying to earn their way and we need to give them an opportunity,” says Clyde Riley, Superintendent of Elkhart Park and Recreation.

This is an opportunity that Morrison says doesn’t come often to the homeless.

“It made me feel special in away, not like a homeless person,” says Morrison.

The Mayor’s Office says the land will be cleared later this summer.

For those still living in Tent City, Mayor Neese is willing to work with them also.