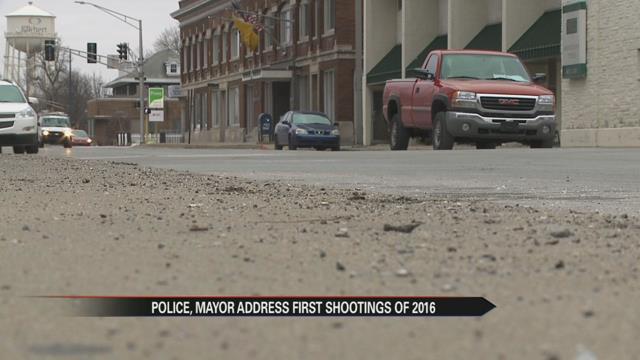 Elkhart police say it's been a quiet 2016 but that all changed Tuesday night.

In a matter of nine hours police say they were called to two separate shootings.

One happened on Middlebury Street and the other they believe originated on West High Street.

Recently elected mayor Tim Neese is now reacting to the crimes. On Wednesday talked on how he plans to curb the violence the best he can in all areas of the city.

“We aren’t just going to be satisfied in terms of having low crime in some parts of the city  but then say well that’s just the nature of what goes on in that particular neighborhood,” says Neese.

These kinds of efforts are what Christopher Cooper is looking for. He lives off Middlebury Street with his family.

"I’d like to see change the shootings and the drugs. I've got kids and they don’t need to see that stuff especially a man get shot,” says Cooper.

On Tuesday evening Cooper witnessed a 21-year-old black male get shot twice, once in the leg and once in the stomach.

When police arrived on scene they found 14 shell casings and three slugs.

"That is quite a few especially for ya know a residential area like that at six o’clock at night,” says Sergeant Chris Snyder with the Elkhart Police Department.

Nine hours later, around 3 a.m. In another residential area, a burglary was reported here on West High Street.

A gun shot was heard coming from a home.

“We found a victim down the road that had been shot that we are presuming is all tied together as one,” says Sergeant Snyder.

The victim was found on South Second Street. Police say he is a 19-year-old black male.

Police say they do not think the two shootings are related.

"They were probably isolated incidents they weren’t something that were just random acts of violence,” says Snyder.

Random or not, Cooper says it happens too often.

“I knew it was a bad neighborhood but we had no other place to go so we moved down here,” says Cooper.

The frequency of crime in Cooper’s neighborhood is something the new leader of the city wants to get a handle on.

“Once we get about 13 vacancies filled at the Elkhart Police Department, there will be several months before the officers can be trained and be put on the streets. But we hope then to begin community oriented policing. To some extent it will help in terms of crime but it’s not a cure all,” says Neese.

If you have any information contact the Elkhart Police Department.