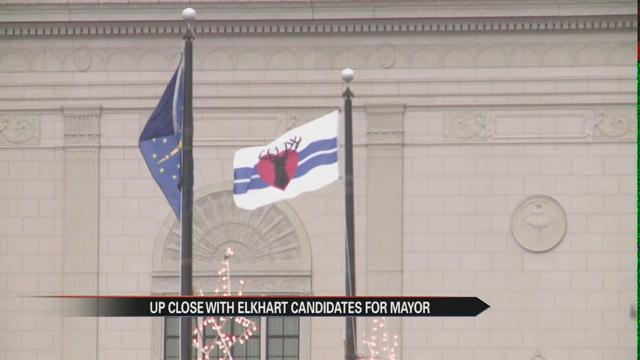 Elkhart mayoral candidates addressed the community on some of the most pressing issues in their city. With less than three weeks to the primary election the candidates met with the Greater Elkhart Chamber of Commerce's Young Professionals during a forum on April 16th.

There are four men who want to be Elkhart's next mayor. Democrats Dick Moore, the incumbent, and 17-year-old Caleb Owens, and Republicans  Tim Neese, former city councilman and state representative, and Dan Boecher, executive director of Downtown Elkhart Inc.

Mayor Moore could not attend the event, but the other three made spoke about crime, the community and ways to attract more people to the city of Elkhart.

Owens says these two words are key to building a brighter future for the city of Elkhart.

“One of the things I don't see either, are city officials coming down off their stoop and coming down and talking to the people,” says Owens.

Owens thinks more candor in Elkhart is a solution to one of the city's biggest issues, crime.

This type of violence seen in areas like Washington Gardens has been addressed by the current mayor, Dick Moore, who increased officers in that neighborhood.

“Let's see more festivals downtown. We have a lot of cultural diffusion in the city of Elkhart and Concord has a cultural club. It's where you share the diversities of different cultures and come together in one,” says Owens.

Mayor Moore has spent the past seven years helping to revitalize downtown Elkhart. He was in officer during the completion of the Lerner Theater.

On the Republican side there was a lot of talk on improving community - law enforcement relations and making Elkhart more attractive for residents and investors.

“Why can't we do the same thing across the city where we task a group of law enforcement officers in a certain part of the city,” said Boecher.

Boecher is referring to the officers currently assigned to Washington Gardens. He says more needs to be done to improve city wide relationships between the people and police.

“The community relation bureau- we no longer have that but at one time we had 10 officers and their work was very diverse,” said Neese.

Neese has lived in Elkhart for decades and wants to focus on a progressive and aggressive business plan.

Boecher also wants to be proactive in attracting new businesses to Elkhart and wants to add an additional element to the education system, One he believes is needed.

“We have got to do a better job of providing programs that will provide the labor the skilled trained labor to those future employers,” says Boecher.

Both Republican candidates stressed the importance of uplifting Elkhart residents. Boecher talked about improving neighborhoods surrounding the downtown area. Neese said improved city services would lead to better quality of life for those in Elkhart.
Share this article: