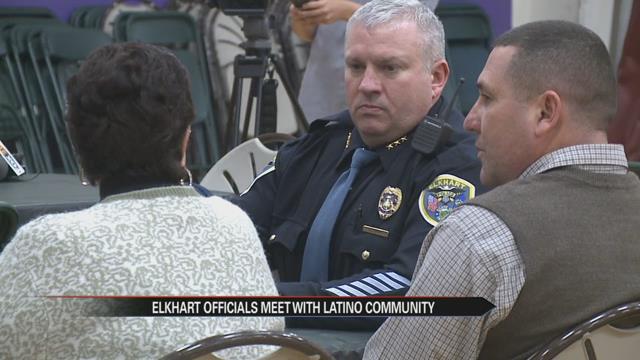 On Friday the Mayor and the Chief of Police of Elkhart attended their first meeting with the Latino community.

By the end of the meeting many stories were told, one man questioned leeway for the undocumented, and there was talk of a future community relations committee.

Rios brings up an issue that her son-in-law faces.

Many who filled the Tolson Center gymnasium on Friday night came to talk about that same predicament.

“He decides well if I go to work I’m risking myself to be taken from my family if I stay home how am I going to support my family,” says Rios.

The community meeting was organized to foster a better understanding between the Latino community and city officials.

“I would love for them to be more understanding you know to work with the community,” says Rios.

Over the course of two hours about a dozen residents brought up the effect of being unable to obtain a license without citizenship.

“They are driving because they need to get to the store to buy food for their children so they don’t get arrested for child neglect,” says Felipe Merino an Immigration Attorney.

During the meeting Merino explained how he often sees clients who drive without a license for basic survival needs. Once they are stopped by police things go south.

“Then those individuals are detained and their whole life goes into a tail spin,” says Merino.

Not everyone could sympathize. One man in attendance questioned finding common ground for undocumented and unlicensed drivers.

Chief of Police Ed Windbigler had assured earlier on Friday, before attending the meeting, that he will up hold the law.

“I understand it and I have empathy but at the same time I have an obligation,” says Windbigler.

Windbigler stood by his statement during the meeting but also learned of possible legislation that would change the requirements to obtain a license in Indiana saying he would support it 100 percent.

“One chief of police may not have much push but that chief compounded with other chiefs of police throughout the state of Indiana could truly sway the legislature,” says Merino.