Elkhart officers have two more hurdles before returning to the streets 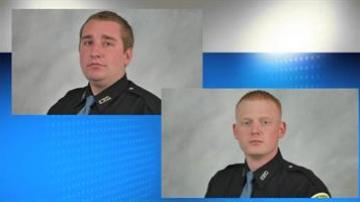 ELKHART, Ind. -- Elkhart Prosecutor Curtis Hill released the results of his office's investigation into the fatal shooting of Shawn Bair at the Martin's in Elkhart on January 15. Hill cleared Elkhart Police Corporals Jason Tripp and Cody Skipper of any wrongdoing and said the officers acted appropriately and saved lives by killing the suspect.

Wrapping up that investigation was one of the last hurdles to Tripp and Skipper getting back on patrol.

Tripp and Skipper have two more tests to undergo before getting back on the road.

Both officers have to go through an internal policy review that involves a mental health exam to make sure the officers are not too traumatized to go back to work.

In addition, they will meet with a board of senior officers to go over what they and others could've done better in this situation.

Assistant Chief Laura Koch says it's important to see what types of improvements, if any, can be made for future incidents.

"What we look at during the internal investigation and the review board is policy and procedures, if they were handled or if they were out of line on any of the policies they have in place," said Koch.

Both officers could be back on patrol as early as next week but an official date has not been decided.