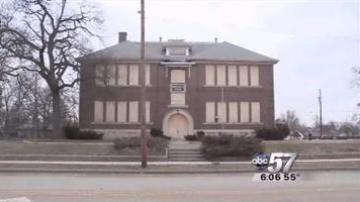 Middlebury Manor was built in the early 1900's as one of the communities first grade schools. But, in the past 40 to 50 years the building has served as office space for various companies and organizations.

In 2009, United Way left the building and no tenants have taken over.

The building is now boarded up and falling apart.

La Casa plans to refurbish the building from top to bottom, creating 16 apartments. The residents of the building will be homeless patients from Oaklawn rehabilitation center.

Right now, La Casa representatives say the current shelter, Faith Mission, is overloaded with homeless Elkhart residents. The renovations of the building will provide low-income housing to the qualified individuals.

Potential residents will be selected by Oaklawn. Individuals would be completely vetted of addictions and must indicate their desire and ability to "move forward with their lives."

Right now, the list of individuals eligible for an apartment in Middlebury Manor is at 120.

However, before La Casa can proceed with their purchase of the building, the Elkhart City Council must approve a rezoning for the the building. Currently, the building is listed as an office space. The rezoning will allow the building to be a residential structure.

This Indiana department is dedicated to ending homelessness in Indiana by 2015.

The planning and development committee meeting on Tuesday night was the third presentation La Casa has made to the city council.

Their first proposal was made on Jan. 3, when the Council rejected the proposal.

La Casa then took an alternative path to approval by opening the discussion to the public.

On Jan. 23, The City Council heard more details on La Casa's plans for the building. The public was invited to share their support or criticism of the project.

After Tuesday's meeting, the next step is for a formal voting by the City Council on Feb. 6. If the City Council approves the rezoning, La Casa hopes to break ground for construction on June 1, 2012 and have tenants moving in by April 2013.