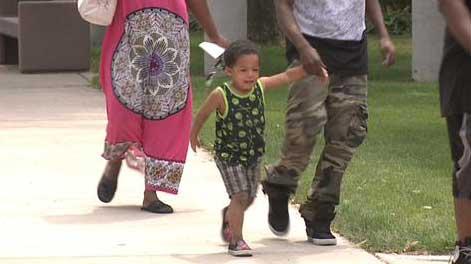 Elkhart Police say they were dispatched to the 800 block of E. Beardsley Avenue at 9:45 a.m. Friday about a child who was found wandering alone.

Officers searched the area and were unable to locate his family.

“He is not old enough that he says his name and he is kind of shy,” said Sergeant Chris Snyder of the Elkhart Police Department.

Without his name, officers had to turn to the media for help.

“We are working with the media and other avenues to try to notify his family,” said Snyder.

He was distressed when he showed up. He didn’t know his grandson had been missing for three hours.

“They decide it’s a nice day and they want to go outside and play and they just kind of wander off,” said Snyder.

The boy’s father showed up and the two left the police station hand in hand.

Sergeant Snyder says as a matter of procedure, the department has to contact the Department of Child Services, but no charges have been filed.