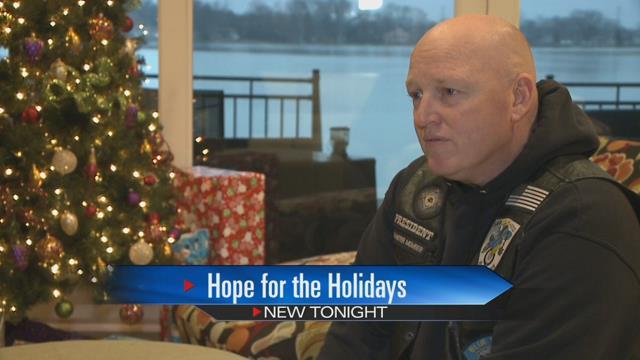 Elkhart police officers are working to give a family of a recent tragedy hope for the holidays.

A little boy who lost his mother moved Officer James Ballard to start a donation drive through his organization the Blue Knights Law Enforcement Motorcycle Club.

“I couldn’t imagine my child going through the same thing, so anything we can do to help in a time of need like that,” said Ballard. “We’re going to put our best foot forward.”

That post touched many people online and now folks from all across Michiana are pitching in to help this grieving family.

This donation drive means a lot to Ballard as the little boy at the center of this tragedy reminded him of himself.

“The little boy is the same age as I was when my mother passed away, 10 years old,” he said. “When the little boy said goodbye to his mother, he said that he was going to miss her and that he loved her and it kind of hit home with me.”

It was hard for Ballard to retell the details of this tragic on-duty call, especially considering the time of year.

“We responded to that incident and confirmed that a female had passed away in her sleep,” he recalled.

That female was a mother of a loving family, now devastated during the holidays.

“The family wasn’t going to have a great Christmas; the little boy just lost his mother,” said Ballard.

So Ballard and the Blue Knights reached out for help and within days help came.

The group accepted money from the community and toys.

So now a family dealing with dark times could at least see the light in their giving community.

The family asked to be unnamed in this story.

Toys, monetary or cash donations can be made out to Elkhart FOP Lodge 52 with a memo stating Caring Christmas.

This story was first reported by ABC 57’s reporting partners at The Elkhart Truth.