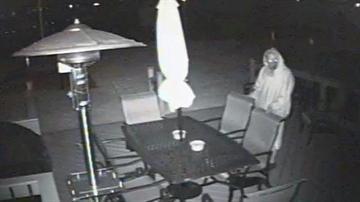 ELKHART, Ind. – The Elkhart County Sheriff’s Department released surveillance photos from a theft that happened in the early morning hours of May 19th on North Shore Drive.

Detectives say at 1:42 a.m., a man stole some patio furniture from the home.

He was wearing a white hooded sweatshirt, white shorts, a bandana over his face, and possibly had facial hair.

The suspect was driving a black Ford pickup truck, possibly a 2006, 2007 or 2008. It appeared to have after market rims and a toolbox in the bed of the truck.

If you have any information, contact the Elkhart County Sheriff’s Department at 574-533-4151.