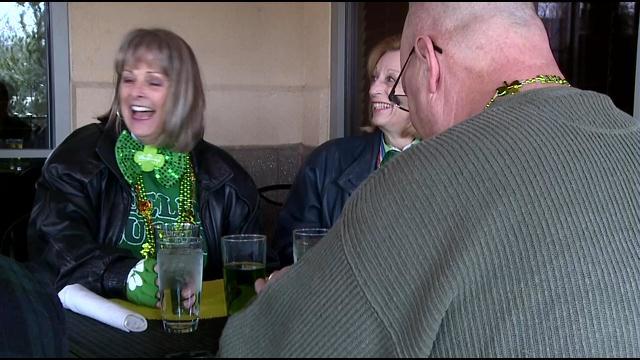 Saturday was a beautiful day for celebrations all across Michiana.

In Elkhart, the fire department dyed the river green for St. Patrick's Day.

That's something that has become a bit of a tradition here in the Midwest.

This city's tradition is only a few years old but that didn't stop residents from showing their support.

People looking to catch a glimpse of the green waters came out not only to show their pride for the Irish spirit but also for their evolving city.

“I can't believe the change in the last eight years, it's beautiful,” said resident Nancy Nicholas.

After spending 50 years in Elkhart, Nicholas has seen the highs and lows of the city.

“You would feel very uncomfortable coming down here but now it's so safe and I love it,” said Nicholas.

“Whatever is going on down here is magic” she said.

Family has a special place in her heart.

For years, Nicholas would drive to Chicago with her husband to watch to see Chicago River dyed green.

After her husband died three years ago, she turned to the city she's called home for so many years to keep the tradition alive.

“Even though he passed away I could keep living," she said. "So I invited my friends and here we are.”

And Elkhart felt the Irish spirit between the green colored outfits, toys, drinks and live music.

“It's fun to get out and kind of brighten everyone's day and bring the Irish pride back to the fire service and the people,” said Lee Fraim, a Clay Firefighter who played in the bagpipe band for the crowd.

The Fire Department played a huge role in Saturday's celebration.

In addition to actually dying the river several firefighters made up the bagpipe band.

The band had members from different departments around Michiana.

“It's not just about one particular community, we'll play all over,” said Derek Erquhart, South Bend Firefighter.

And no matter where Nicholas goes she says she'll keep the Irish spirit too.

“I don't care if I'm in Delray Beach, Florida, I'm going to party on” she said.