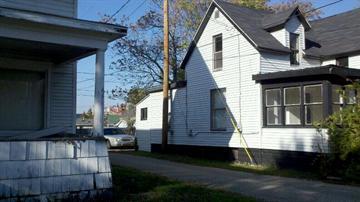 ELKHART, Ind. - The landlord of the house at 234 Dr. King Drive, where a shooting took place Saturday night, identified one of the victims as Jarvis Joiner, 35.

The landlord said family members of Joiner said he was shot once in the back.

Joiner was rushed to Elkhart General Hospital around 11:15 p.m. for his injuries.

The nursing supervisor at EGH told ABC 57 news Sunday evening that Joiner was transferred to Memorial Hospital in South Bend. There is no word on his current medical condition.

Joiner is currently on probation and his landlord says, Joiner mentioned meeting with his probation officer last week while the two were working on the roof of the home.

A 19-year-old woman was shot and killed in the same shooting.

According to people in the neighborhood, and in other locations in Elkhart, the girl goes by the name Nunu.

The woman's real name has not yet been released.

The violence broke out just after 11 p.m. Saturday night. An autopsy of the 19-year-old will be scheduled Monday.

Police are not saying whether the girl was with Joiner when he was shot, or if she was nearby when the shooting happened.

A single pool of blood can be found at the scene of the shooting in Joiner's backyard, along with police tape and latex gloves.

Stay with ABC 57 News for the latest information.