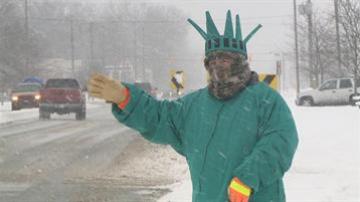 ELKHART, Ind. -- The city of Elkhart will be cracking down on advertisers in an effort to promote public safety.

A new ordinance, which went into effect Feb. 1, restricts people from standing near the road and waving signs.

The city says the signs are distracting, and a potential hazard. Businesses say that's not true, and want the ruling canceled.

Dressed warmly, and near the side of the road; Samuel Miller makes his living by waving a sign.

"I believe the sign brings in awareness to the customers that we are open, and it is tax season," Miller said.

A season that could be in jeopardy.

The city of Elkhart said it plans to crack down on what it's calling a public nuisance.

That is, people near the side of the road waving signs.

"You're affecting the economy," Miller said. "You're punishing your own community."

"We just got to do what we can within whatever guidelines we have," Brian Conwell, owner of the Elkhart branch of Liberty Tax Service, said.

He said it may not seem like it, but people like MIller are essential to his business model.

More than a third of his customers come in because they see the living ad.

"I'm not sure why it was taken," Conwell, speaking about the new ordinance, said. "We've never had an issue before."

It's still too early to tell if business will be hurt, and luckily, Miller hasn't been cited yet.

Leaving questions on how exactly this mandate will be enforced.

"People with businesses with signs are here to provide services to our community," Miller said. "They're not here to harm the community."