Engineer warned of cracking on bridge two days before collapse 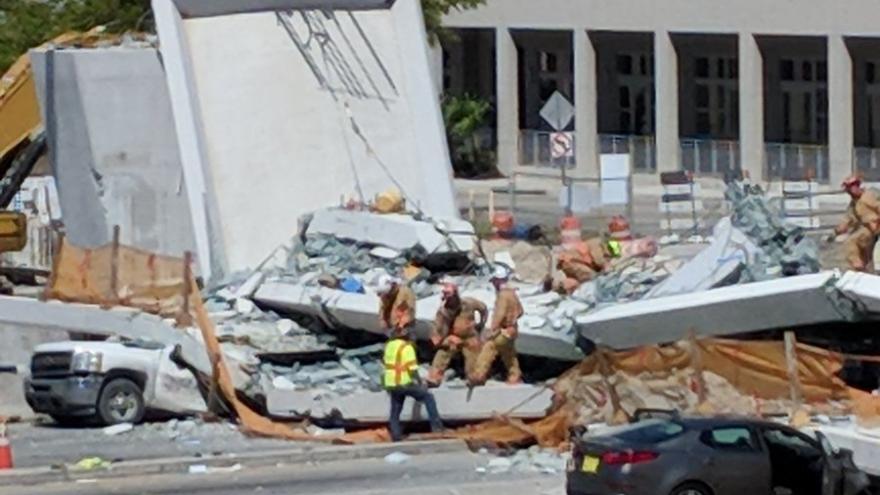 (CNN) -- An engineer for the company that designed a pedestrian bridge that collapsed Thursday, killing at least six people, left a voicemail two days earlier for a Florida Department of Transportation employee advising there was "some cracking that's been observed on the north end of the span."

The state employee was out on assignment Tuesday and didn't hear the voicemail from W. Denny Pate of FIGG Bridge Engineers until he returned to the office Friday, the DOT said.

Pate's voicemail said the design company didn't see any safety concerns on the project near Florida International University but that the cracking was not a good development and would have to be repaired.

The news came as the National Transportation Safety Board disclosed that construction crews were working on diagonal components on the north end of a future pedestrian bridge when the structure collapsed.

The NTSB investigator in charge, Robert Accetta, said Friday night it was too early to tell whether the bridge failed at the point construction workers were applying post-tensioning force to strengthen diagonal members.

When asked about the cracking, Accetta said: "I would have to say that a crack in the bridge does not necessarily mean that it is unsafe."

A spokeswoman for FIGG said the company is working on a response to the release of the voicemail.

• Sen. Marco Rubio, who visited the bridge site Thursday, posted on Twitter: "The cables that suspend the #Miami bridge had loosened & the engineering firm ordered that they be tightened. They were being tightened when it collapsed today." Rubio has been a visiting professor at the university for the past 10 years.

• At least nine people were taken to hospitals, authorities said.

• The structure's 950-ton main span had just been installed Saturday using an accelerated construction process meant in part to reduce the time that street traffic was halted.

• The university's president, Mark Rosenberg, said FIU followed required processes during the bridge's construction and all contractors were certified by the state.

The bridge, due to be finished in 2019, was supposed to enhance safety -- letting walkers cross a busy eight-lane street with less worry after a vehicle last year struck and killed an FIU student.

Instead, it collapsed Thursday, months before it was to open, crushing cars below, killing at least six people and leaving investigators with the difficult task of trying to figure out why it happened and who might be held responsible.

Emergency crews on Friday shifted their focus from a rescue mission to the "very slow process" of digging through the rubble for more victims and preserving evidence around the unstable bridge remnants, Miami-Dade police spokesman Alvaro Zabaleta said.

One of the things crews hope to do is raise the bridge off vehicles using a large inflatable airbag, a source close to the bridge collapse investigation told CNN.

The first to be identified was an 18-year-old FIU student. The father of Alexa Duran told el Nuevo Herald newspaper in Miami that his daughter had died. "My little girl was trapped in the car and couldn't get out," Orlando Duran said.

Duran was driving an SUV under the bridge. A male passenger was able to get out and is at a hospital with neck and leg injuries.

Witnesses described hearing a loud boom Thursday and moments later, finding victims, including construction workers, strewn throughout the wreckage. Other people were trapped in cars, they said.

Sweetwater police Sgt. Jenna Mendez was stopped at a red light one intersection away when she saw the bridge crumble. At first, she thought, "Why would they have brought the bridge down during the day?"

Mendez drove forward, saw crushed vehicles and realized "this was not on purpose, this was a catastrophe," she told CNN.

She rushed into the debris and saw injured construction workers atop the detritus, she said.

"I started yelling to civilians in the crowd, 'Please get me doctors. ... I need help up here.' A doctor jumped up, and she started helping," Mendez said.

Doctors and medical students ran to the scene from a nearby building and started treating victims, said Isabella Carrasco, a student at the University of Miami who had passed under the bridge in a car just before the collapse.

Carrasco saw at least five cars crushed beneath the bridge, she said.

The under-construction bridge was meant to connect the FIU campus to the Sweetwater neighborhood, home to more than 4,000 of its students, according to a news release on the school's website. FIU is the second-largest public university in Florida, with about 50,000 students.

The 174-foot main span had been assembled on the side of the road, allowing traffic to continue. Then, on Saturday -- at the start of FIU's weeklong spring break -- a rig moved the span into position over the street as community members gathered to watch. The process took about six hours.

A time-lapse video that FIU posted to YouTube shows some of the assembly, as well as Saturday's maneuvering of the span into place over 8th Street.

The bridge was scheduled to open to foot traffic in 2019, and was designed to boost safety on busy 8th Street, where an 18-year-old FIU student was fatally struck by a vehicle in August.

"It is exactly the opposite of what we had intended, and we want to express our deepest condolences to the family and loved ones of those who have been affected," Rosenberg, the university's president, said in a video.

"The bridge was about collaboration, about neighborliness, about doing the right thing," he said. "But today, we're sad. And all we can do is promise a very thorough investigation, to getting to the bottom of this and mourn those who we have lost."

The bridge was designed to withstand the strength of a Category 5 hurricane, according to a fact sheet on FIU's website, and it was supposed to last for more than 100 years. It cost $14.2 million to build and was funded through a $19.4 million grant from the US Department of Transportation.

Accelerated Bridge Construction (ABC) technology was used in the construction, according to the university. ABC streamlines the building process so bridge construction projects can be completed more quickly and be more cost-efficient.

MCM, a construction firm building the bridge, said in a statement it would "conduct a full investigation to determine exactly what went wrong and will cooperate with investigators on scene in every way."

FIGG Bridge Engineers stated: "We will fully cooperate with every appropriate authority in reviewing what happened and why. In our 40-year history, nothing like this has ever happened before."

Bolton Perez and Associates, a third company involved in the construction of the bridge, would not immediately comment.

The National Transportation Safety Board will lead the federal inquiry, and a team of investigators arrived Thursday night.

CORRECTION: This story has been updated to correct the number of people killed.