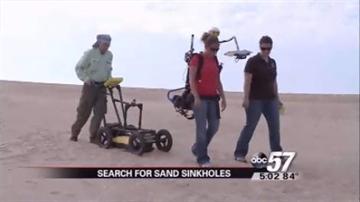 LAPORTE COUNTY, Ind. -- Mount Baldy has been closed since 6-year-old Nathan Woessner was rescued from a sinkhole. Monday, the EPA brought a team of about seven people to use high tech equipment to identify any sinkholes or dangers under the sand.

The equipment the EPA is using is normally used to locate broken pipes or hazardous materials underground.

With the naked eye, it's hard to know what's exactly under a fast moving dune like Mount Baldy.

But that's exactly what the EPA's "Region Five Team" is trying to help the National Park Service figure out.

"Our data is here to support the NPS so that these types of incidents don't happen again," said Francisco Arcaute, EPA Region 5 Spokesman in Chicago.

One month ago Nathan Woessner was walking up a hill on Mt. Baldy when he fell into a sinkhole. A white pole marks the spot where he went under the sand. That's where they're starting their investigation.

"At this point we know Mount Baldy is the fastest moving dune and we know there's trees under it. This is the only spot that's closed, the only spot we're investigating," said Bruce Rowe, Spokesman for the National Parks Service.

All 42 acres of the dune are being examined.

The equipment was brought in by ATV and placed at the bottom of the dune.

EPA's crews placed markers in the sand, and the equipment is carried and even rolled up the hill.

"It sees shapes for example if there is a tree so to speak or something buried there or who knows what. We'll look into it," said Arcaute.

Leading the path is a high tech GPS tracker which is worn like a backpack.

The ground sensing radar equipment follows. It produces a series of images of the ground to a depth of 30-feet.

While this part of the investigation could possibly go into Tuesday. It's unclear how long it will take and when Mount Baldy could reopen.