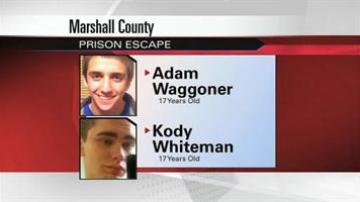 MARSHALL COUNTY, Ind. -- Two Marshall County teenagers escaped from a secure detention facility in Southern Indiana and the Marshall County Sheriff's Department and Plymouth Police are searching for them.

The great-grandmother of 17-year old Kody Whiteman said she is distraught at the path her grandson has chosen to take and hopes they will be caught before something serious happens.

"It breaks my heart, I mean, I want him to be something better than what he’s headed for," said Ruby Whiteman.

She is disappointed in Kody.

He and his friend Adam Waggoner, who is also 17-years old escaped from a southern Indiana correctional facility on Sunday morning.

Police believe the teens stole a vehicle and drove it to Marshall County.

Ruby just wants her grandson to do the right thing.

Police say they recovered the stolen car on Tuesday.

Residents in Plymouth are worried they may strike again.

"I’m a person that leaves my keys in the car, in the ignition," said Plymouth resident Megan Marsh.

Police received reports Wednesday of several cars that had been rummaged through.

The Sheriff's department is asking residents to remove their keys and lock their doors to their cars and also if anyone knows the whereabouts of these two they are urged to call the Marshall County Sheriff's Department.