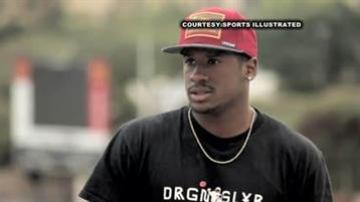 SOUTH BEND, Ind. -- In an interview with Sports Illustrated, suspended Notre Dame student and former football player Everett Golson admitted to cheating on a test. Golson blames his cheating on poor judgment and says the experience has been a humbling one.

"Basically I had poor judgment on the test. It wasn't due to poor grades or anything like that," said Golson.

Last may the University of Notre Dame announced starting Irish quarterback Everett Golson wouldn't be joining his teammates on the line of scrimmage this season and he was suspended from the university.

For the first time Golson spoke about what led to his suspension.

Golson was asked if he cheated on a test.

He was then asked what happened.

"I mean that's what it was. Like I said, I'm just going to leave it at poor judgment," said Golson.

Cheating on a test is a violation of the honor code at the University of Notre Dame-an offense that can merit dismissal for students.

Golson says it wasn't a paper, it wasn't plagiarism, that he cheated on a test.

Golson says what hurts the most is watching his teammates play without him this season.

"Just seeing those guys going out there and battling each and every week and me not being a part of that, that really kind of hurt me," said Golson. "It's very humbling, very humbling."