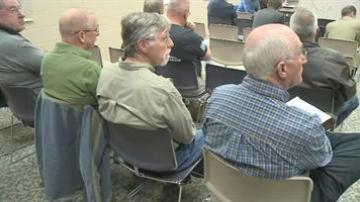 ELKHART COUNTY, Ind.-- Ten workers with the Elkhart County Highway Department lost their jobs in March. On Saturday these former employees asked their council members to investigate the inner workings of the department.

The Elkhart County Council meeting was packed with concerned citizens and former employees wanting to discuss how the highway department is using taxpayer money. One man who was a part of the layoff said he found a job, but others haven't been so lucky.

Mitch Sailor said, “I know a few of those guys have not been able to find work yet, and for some of those guys they were here for 30 years. I feel bad for them.”

On Saturday Sailor took to the podium to talk about his negative experience working for the highway department.

“It’s not so much a heartbreak. We just want to see the right thing be done for the taxpayers. We’ve seen a lot of wasted money,” Sailor said.

Sailor said he was shocked when he saw that the highway department had posted a job opening online this week.

“There was not money for them and now they are turning around and rehiring people?”

Sailor hopes his council members will work with the three commissioners to restructure the department's finances.

“They send them out on weekends and pay them time and a half to patch holes when it should be done during the week," Sailor said.

Randy Tony said he felt strongly that the department's financial problems are due to mismanaged time and resources.

"When you’re working 70 hours on a 40 hour job, there’s something wrong,” Tony said.

In defense, Commissioner Mike Yoder said restructuring the department is not an easy task.

“We believe we can run the department with 10 or 12 less people but we’re not sure. It might be eight less people, we’re looking for people with a particular skill set.”

In conclusion, Commissioner Yoder and the council said they plan on meeting with the supervisors at the highway department in May.

“It doesn’t mean the former employees were bad employees or workers at all, but our highway department supervisors felt that they didn’t have the particular skill set that they were looking for going forward,” Yoder said.