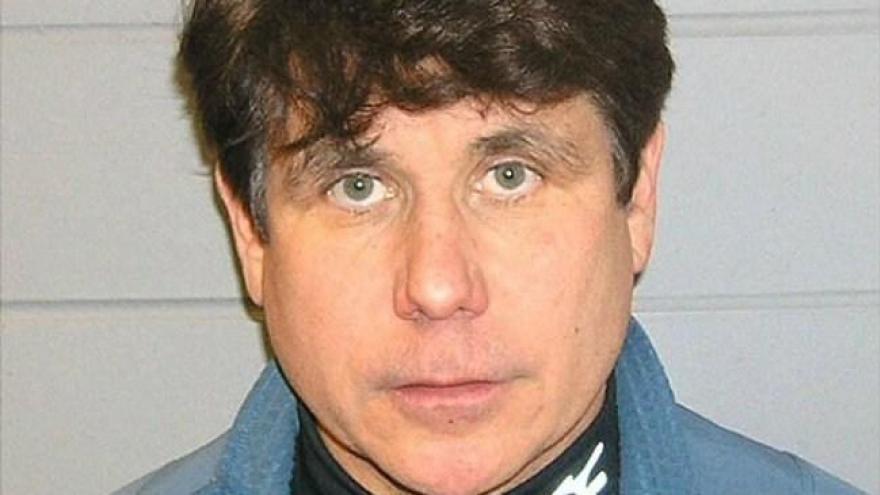 (CNN) -- A federal judge Tuesday imposed the same 14-year sentence against former Illinois Gov. Rod Blagojevich, despite pleas for a reduced term from his wife, two daughters and the disgraced politician, himself, who's serving time for corruption.

Blagojevich, 59, who was convicted in 2011 of charges including attempting to sell the Senate seat left vacant by President Barack Obama's election, made an emotional plea for mercy to U.S. District Judge James Zagel via closed circuit television from the Colorado prison where he's incarcerated.

An appeals court last year threw out five of his 18 convictions but upheld others relating to soliciting campaign contributions in exchange for naming someone to the empty seat.

Outside of the court, his wife, Pattie, said her husband's strength will get their family through his absence.

"Once again unfortunately, I have to express our profound disappointment in the ruling by Judge Zagel," Pattie Blagojevich said, standing with daughters Amie and Annie. "From our point of view and from the point of view of thousands of people that have reached out to me over the last 4 years, we find his sentence unusually cruel, heartless and unfair."

Leonard Goodman, Blagojevich's attorney, opened up the possibility of taking the case to the Supreme Court.

Prosecutors had opposed a reduced sentence.

Blagojevich, a Democrat, was accused of trying to profit as he considered whom to appoint to succeed Obama after he vacated his Senate seat to move to the White House.

He was convicted of corruption after a jury returned 18 guilty verdicts against him.

Federal prosecutors had originally sought a sentence of 15 to 20 years but his lawyers called that excessive and asked the judge for leniency, even as they admitted for the first time that crimes were committed.

He was found guilty of multiple counts involving wire fraud and extortion, and acquitted on one count of bribery. The jury was unable to reach verdicts on two counts of attempted extortion.

Blagojevich was taken into federal custody in December 2008, less than two years into his second term as governor. A federal grand jury indicted in him April 2009.

The allegations prompted his impeachment by Illinois' House of Representatives and his removal from office by the state Senate in 2009.

At the time of his arrest, prosecutors said court-authorized wiretaps caught Blagojevich offering Obama's Senate seat in exchange for personal gain, including a job with a nonprofit or union organization, corporate board posts for his wife, campaign contributions or a post in Obama's administration.

Blagojevich's defense argued that he just liked to talk and that he ended up with nothing.

After his removal from office, the former Cook County, Illinois, assistant prosecutor, state representative and Golden Gloves boxer remained in the public eye, appearing in a Chicago comedy show, releasing an autobiography, and competing on the TV show "Celebrity Apprentice."