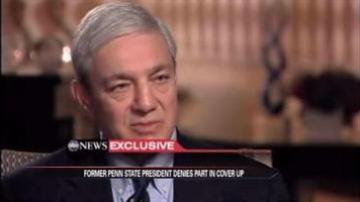 The ousted former Penn State president is speaking out about the sex abuse scandal the school.

Spanier wants his reputation back and is denying that he participated in a cover up.

He says that he was also once a victim of abuse by his father.

"He was very abusive toward me," Spanier said. "I've had, for example, four operations as an adult to correct injuries inflicted from my father. I never meet anyone who's had a higher level of awareness about such issues than I have had."

Even though he has not been charged with a crime, Spanier still feels that he has been unfairly indicted by the media and by the independent report what said he failed to stop a predator.