EXCLUSIVE: Man drives off road and crashes into several trees 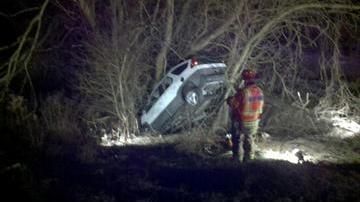 ST. JOSEPH COUNTY, Ind. - A man was injured after he crashed his SUV into a bunch of trees early Sunday morning.

The accident happened at 2:20 a.m. at Ironwood and Adams Road.

Deputies believe that the driver, who has not been identified, was on Adams Road and blew the stop sign, driving over Ironwood road up an embankment and into a series of trees; it appeared that the driver thought the road went straight, in fact it T's at Ironwood and you can only go left or right.

The Pontiac Aztec was nearly unrecognizable on the scene because it was covered by so many branches.

Firefighters with Clay Fire had to use chainsaws to cut some of the branches away from the vehicle in order to get the injured driver out.

The driver was stuck inside his badly damaged SUV, it took at least 20 minutes to extricate him from the vehicle.

It was too soon on the scene Sunday morning to tell if alcohol, drugs or speed were factors in the accident.

The driver was the only person in the vehicle at the time of the crash. He was taken to Memorial Hospital with non-life threatening injuries.

ABC 57 News was the only TV station on the scene of the accident. We provided LIVE video and reports from the scene on UStream. You can see the UStream video provided by Brian Dorman by clicking here.

We have put in a phone call to the Sheriff's Office for more details about the accident including the name, age and injuries of the driver.