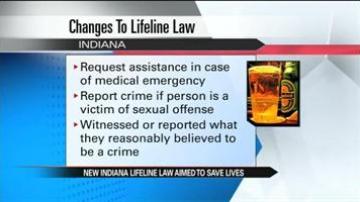 SOUTH BEND, Ind. -- On July 1, 2014, a new provision of the Indiana Lifeline Law takes effect. It gives a person under 21 years of age who has been drinking protection from prosecution for certain alcohol offenses if they are reporting a medical emergency, a sexual offense or other crime.

Both police and students think the expansion of the existing law will help save lives.

"Anytime someone calls with the best intentions and is attempting to assist someone that's going to be looked at as a positive and not a negative," said South Bend Police Captain Phil Trent.

Under the current provisions of the law, anyone who is under 21 and drinking alcohol won't be prosecuted for reporting a medical emergency due to alcohol consumption.

The person contacting police must cooperate with police to be eligible for immunity.

"We appreciate the call if someone is impaired, but we also need their cooperation, if they want to fall under the umbrella of the lifeline law and be held harmless," said Trent.

As of July 1, 2014, the law will protect anyone under the age of 21 who has been drinking and calls 911 to report a medical emergency, to report being the victim of a sexual offense or witnessing what the person believes to be a crime.

Students think this will encourage more people to call police in an emergency situation and ultimately save lives.

"No kids should fear repercussions coming from the law, when safety is an issue and one of their friends. Safety comes first," said student Michael Morsches.

The law previously only protected those under 21 reporting a medical emergency due to alcohol consumption.

"I think it would help rape victims especially. It would influence people to call the police if they did see something happening. Because I feel like a lot of times people are scared to call the cops because they're not sure if they're going to get in trouble," said Citlaly Gonzalez.

Trent says he already sees the benefits of the Lifeline Law -especially when it comes to drug overdoses.

He says it's important to spread the word so that those under 21 are aware of the law and don't hesitate to call police.

Since 2004 more than two dozen Hoosiers under the age of 21 have died as a result of alcohol poisoning.

Click here for more information on the expansion of the existing law.