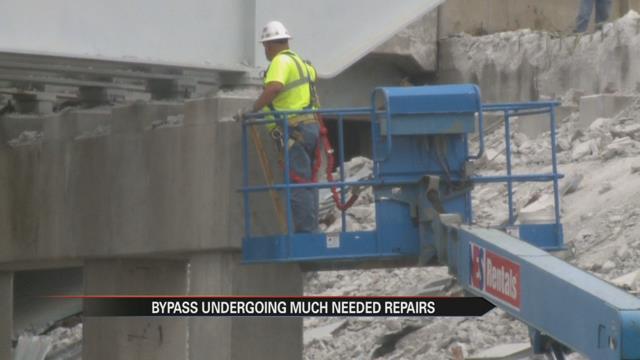 Part of the bypass is undergoing some construction, which means drivers are going to have to deal with some delays.

The bridge where US 20 joins the bypass near South Bend International Airport is undergoing major work, which includes removing 11 beams.

Starting Thursday and ending on Monday, drivers on US 20 should expect major delays both east and westbound.

“We’re going to have to restrict obviously any traffic from flowing through that area because when they do remove those very large beams it’s going to take up a lot of space and traffic wouldn’t actually be able to get through,” said Dough Moats, Media Relations Coordinator for the Indiana Department of Transportation.

The restrictions will include periodic 20 minute closures lasting from 8 a.m. to 5: 30 p.m. between Pine Road on the west side of the bridge and Linwood Boulevard on the bridge’s east side.

“I tell people to avoid the area altogether because a 20 minute delay is an extreme amount of time when you’re sitting there in your car, especially when it’s warm and humid like it has been lately,” explained Moats.

The removal of the beams is part of an ongoing bridge replacement project.

With each beam equaling the length of half a football field, the process will take some time.

“They’re actually going to shore up the bridge, remove these beams in pieces, they’re going to cut them in half, and remove them one at a time. So as you can imagine that’s going to take a lot of time,” said Moats.