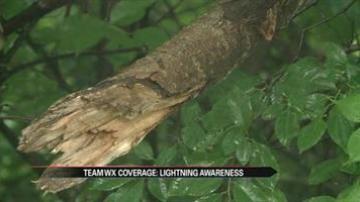 SOUTH BEND, Ind. -- Lightning is the second leading cause of storm-related deaths in the United States. In the US, 30-50 million lightning strikes are recorded each year. During lightning awareness week, we found out ways you can stay safe.

Lightning has claimed the lives of 268 people since 2006.

Thunderstorms peak during the summer in Michiana.

"That's when things start to peak. Of course, everybody is outside more, doing a lot more things," said Lonnie Fisher, a Meteorologist with the National Weather Service - Northern Indiana.

Hundreds of people are injured by lightning strikes every year.

"A home, even a vehicle are the two best forms of shelter that can protect you during a thunderstorm from lightning," said Fisher.

The most common deaths occur on the water and the golf course.

Even if you head indoors, you're still susceptible to being hit.

"Lightning is lightning. You have no control and no warning where the next lightning bolt is going to occur," said Fisher.

The best thing you can do is stay inside and stay away from any windows. Avoid using phones with cords and use surge protectors for electronics.

Experts say you should wait at least 30 minutes after the last clap of thunder before heading outside.

Lightning rods are also a good way to keep your home safe. They transfer strikes from your roof to an underground grid.