Failure to be consistent main reason for Smith's departure 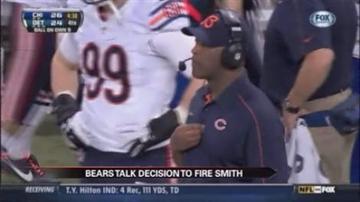 CHICAGO — The Chicago Bears ended the 2012 season with a win and a winning record. But on the day after the final day of the regular season, the team fired head coach Lovie Smith.

Smith spent nine seasons with the Bears and took them into the post season in three of those nine years. But the team has failed to make the playoffs the last two seasons.

And that was the major factor in Chicago's general manager in letting the coach go.

"We have searched for answers. The end result is we did not have enough consistency," said Phil Emery said at a news conference on Tuesday. "That paired with not getting into the playoffs on a consistent basis, being able to meet our organizational goal to be in a consistent spot in the hunt to win championships, I made the change moving forward."

Smith was not the only coach who found himself with out a job. Six other NFL teams fired their head coaches or general managers.