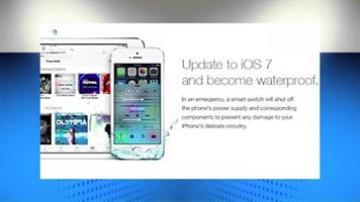 MISHAWAKA, Ind. -- iPhone users have been updating their phones this past week to the new operating system iOS7. It brings a lot of new features to the phone, but a recent ad on social media sites reveals a feature that is not true.

This fake ad claims that when you update your iPhone that it will actually make your phone waterproof. But unfortunately when you mix your iPhone and some water together, all you are going to get is a dead, wet, and unusable iPhone.

“It looks like an Apple ad just by the text and stuff like that,” says Haven Russell, South Bend resident.

This fake advertisement was created by a group of users on 4chan.org. It uses many of Apple's marketing characteristics and is spreading on social media sites, like Facebook and Twitter.

Some people thought it was real.

“When I first saw the ad, I thought the marketing was good, it looked legit,” says Tom Roman, Notre Dame student.

Others saw through it.

“No. How could an operating system waterproof your phone?” says Pooya Ghiaseddein, Granger resident.

“In what sense can you possibly believe that plugging your phone into your computer or pressing a button on it could make it waterproof, that’s your fault,” says Erik Boneff, Notre Dame student.

Tech experts at a Mishawaka Radio Shack say the only thing that could keep your phone safe from water damage is a waterproof case.

“There are cases that you can get that are waterproof for them, but the phones by themselves are not even water resistant,” says Mike Brown, store manager at Radio Shack.

As believable as the fake ad may look, the phone is simply not meant to get wet.

“The iPhone is not waterproof and no software out there can make a non-waterproof phone waterproof,” says Juan Cervera, Sales Associate at Radio Shack.

ABC 57 did reach out to Apple and 4chan for a statement. So far, they have not reached back.

In the meantime, the best advice is to keep your phone away from water and if you do happen to get it wet, tech experts say to leave your phone in rice for two days.