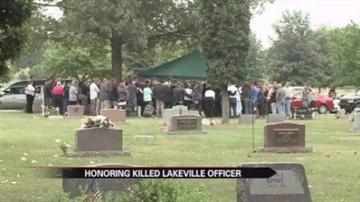 LAKEVILLE, Ind. -- Lakeville Police Officer and volunteer firefighter Danny Cox was laid to rest Monday. Nearly everyone in the town filled the funeral home. Cox was killed in a car accident last week.

"I was able to call him for anything. If I was scared at home he would call and check my house for me. He actually passed away on my birthday," said Danny's cousin Crystal Bragg.

Flags in the town of Lakeville are flying at half staff to honor Danny.

brian Hedger was one of Danny's best friends. He said Danny was a devoted public servant and true comedian. He could make anyone smile.

"When I first got to the police department he was a roommate of mine and he tried to be helpful and iron a shirt of mine that was polyester. He melted right through it. That's one of my strongest memories. I look at it and smile," said Hedger.

As the procession went through town, the fire department honored Danny with empty gear, a symbol of their fallen firefighter.

"Whether it be fire, police or EMS, we're all brothers and sisters so this is a way to salute him and pay tribute to his family," said firefighter Mike Hargreaves.

Danny's wake was held at the American Legion - he was very active in helping veterans in the community.