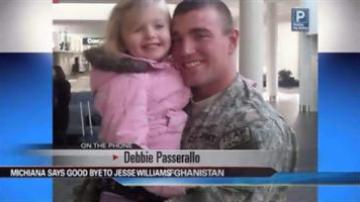 ELKHART, Ind. -- It's been over a week since Jesse Williams' family found out he was killed in Afghanistan.

His helicopter crashed and Williams, along with five other people, died.  One woman survived, but sources say she is gravely injured.

Jesse's mom, Debbie Passerallo, says Jesse will always be remembered as "one of the strongest physical and mental individuals" she's ever met.

The family's first Christmas without him was somber, but filled with memories, pictures, and stories.

But what they talked about most, is how his memory should live on here in Michiana.

"We still have soldiers over there, and I think people tend to forget there's still a war going on over there and our men and women are there," says Passerallo.