Families fighting heroin use in Michigan 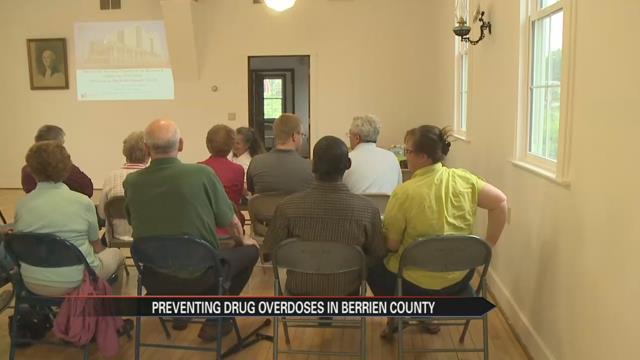 A heroin problem in Berrien County has families fighting to save lives. On Thursday the Families Against Narcotics task force held a meeting at the Tryon School Community Center to discuss prescriptions that can stop cravings for drugs and alcohol.

Carol Stockman lost her 24-year-old grandson to a heroin overdose in September of 2014. Now she's coming public with her family's story to let others know they're not alone.

Stockman said, “It was a Saturday, I’d been to church to do a funeral for somebody else so when I came home I was just sitting in my chair resting, and my son called and said mom Sam’s gone.”

Stockman said she's been using her tragedy to help others not go through the same grief.

Stockman said, “God kinda told me, you should do something about this. And not that I’m any magician or anything but I thought if there’s anything while I’m still left on this earth, because I'm 87, I will do something.”

It was at one of these meetings that Stockman met Amy Jonatzkey. Jonatzkey said she's found her 24-year-old son overdosing on heroin several times.

Jonatzkey, “Our next option was to press charges, have our son arrested and put in jail. And we did that because we knew if he was sitting in jail, he couldn’t use. And at least for the time he’d be in jail... he’d be alive.”

During Thursday night's meeting, Jonatzkey and the group learned about a Vivatrol shot.

According to doctors, this monthly shot is free for medicaid patients and it stops cravings for drugs and alcohol.

Jonatzkey said, “What we’re working on now, is that when he gets out, that we have the programs and the things in place to help him succeed.”

The president of the Families Against Narcotics group is organizing a seminar on addiction and heroin at St. Joseph High School on August 28th.

Nancy King said, “It’s been my way to connect to help them know that they’re not alone. But to also be able to get education about prescription drugs.”

For more information you can visit this website: http://www.familiesagainstnarcotics.org/Southwest-Michigan

Stockman said,  “We can’t just stick our head in the sand and say that’s not my problem.”