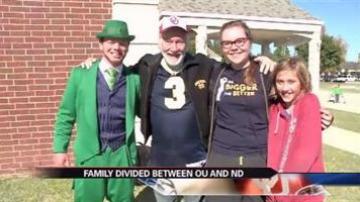 OKLAHOMA CITY, Okla. – The Notre Dame-Oklahoma game might have sports fans divided, but the rivalry also has a family picking sides.

"There really aren’t any words to describe it," said Notre Dame Sophomore Mariah Flenniken of her 16 hour bus trip to her home state of Oklahoma.

"I was so excited coming down," she added.

Flenniken is a member of the Notre Dame Marching Band and on top of a highly anticipated match up she gets to have some quality family time while in the Sooner State.

"It’s just incredible to experience it with all my friends and family," said Flenniken.

Her dad is stuck in the middle of a family crisis.

Tim Flenniken came to watch his daughter march with the Notre Dame Band on Friday. He was wearing a Michael Floyd Jersey and an Oklahoma Hat.

"I go for both teams, but I just kind of like one team better than the other team," he said as he patted his Notre Dame jersey on his chest.

Why the OU hat? His other daughter is a freshman at the University of Oklahoma and she'll be wearing crimson in the Oklahoma Marching Band this weekend.

"It’s just been one crazy, exciting weekend and it’s just starting," he said of the jam packed weekend.

While only half of the family will be happy with the results of Saturday’s game the bragging rights will stand at least for a year.

Next year the Fighting Irish will face the Sooners at home during the 2013 season.