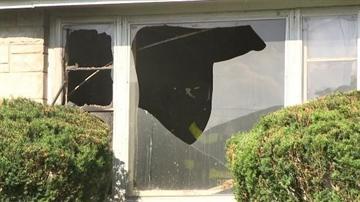 It was too close of a call for Lekealon Harbor. Just hours ago -- he found out his grandmother's home was on fire, while family members were still asleep inside.

Fearing the worst, he came rushing.

Thankfully, they all made it out in time, but the home he grew up in may be gone for good. It's an outcome, he's praying against.

"Everything's in the Lord's hands. Hopefully, God comes through and lends a helping hand," Harbor said. "We really need him."

He said a child inside may have been playing with a candle, an accident that took a turn for the worse.

When firefighters arrived on scene, flames and smoke had taken hold of the home's entrance. There was a lot of damage inside, but it's still too early to tell whether it can be saved.

"Fortunately, it was just a room in contents, but it still has a lot of mess from smoke, water and insulation," Jim Luccki, Battalion Chief of the South Bend Fire Department, said.

Still -- Harbor feels for his grandmother.

She's lived in the home for 40 years, so losing it will hurt the family more than just financially.

"We didn't have a lot, but she always kept meals on the table; it's just a great place," Harbor said. "Every childhood memory is here on this block."